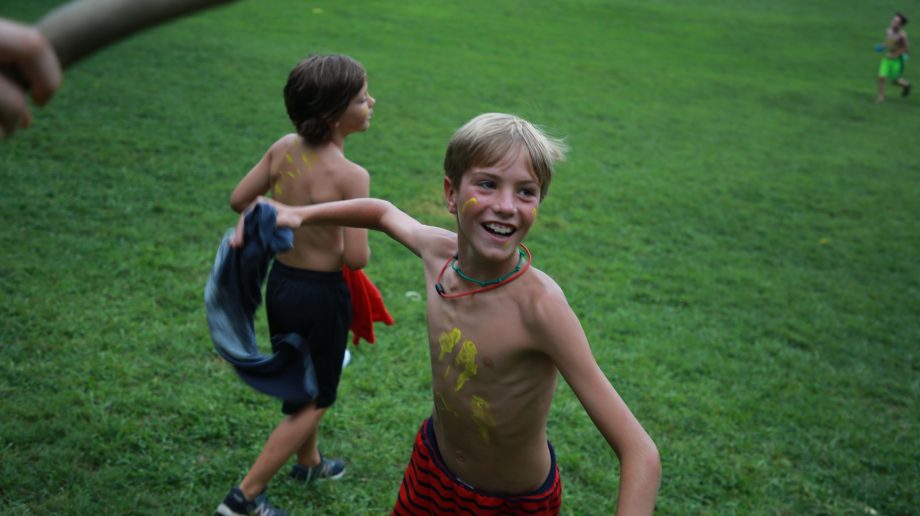 We place an incredibly high value on winning in our culture. This manifests most obviously in our sports world. Every year dozens of sports teams compete to win their National or World Championships, pouring millions of dollars and copious amounts of time into this goal. We use terms like winners and losers, us vs. them, and even David vs. Goliath to categorize participants. Of course, there’s nothing particularly wrong with winning. But, I think, the value that it can take away from simply running around on a field at dusk or freely playing and using the body God has given us, is unfortunate at times. Last night I was reminded of how we see this “winners mentality” at Rockmont when I encountered a young man named Will from the Buckeye Tribe after a trying game of shirt-tail-tag.

Shirt-tail-tag games have been a staple at Rockmont for a long time and Will was figuring out just how fun they are. They give young men the ability to access that good competitive side of their psyche and set them free to run.

During a game last night called Transformers, the Buckeyes (our youngest campers) had been intensely looking for a key piece of the game called the AllSpark so that they could capture it and defeat either Optimus Prime or Megatron; if this sounds like a foreign language, trust me, it makes perfect sense to these guys. The game progressed for over an hour, campers pulling one another’s shirt-tails, peeling back bushes, and working in pairs to find the precious AllSpark. Will was in the thick of it, part of the Decepticons team led by Megatron.

Being a spectator to these games is like watching someone dancing who feels the rhythm of the song, and does not realize that they’re being observed and does not need to perform for anyone. They dance because they feel free to do so. The same is true for campers as they play hard and run fast in these games. Running, jumping, and searching is more of a dance than a performance.

We need this energy, especially at this age. Will had been working with his teammates, laboring to win this game. He gave everything he could to win. Eventually, the gradual pace of the game was met with the discovery of the AllSpark and now all campers had to do was pull the shirt-tail of either Optimus Prime or Megatron (both are counselors) and put the AllSpark to their chest to win the game. Fifty-two campers and twelve counselors converged on a tiny patch of the field, scrambling to pull shirts and defeat the other team and Will was right in the middle of it. This was where the action was and Will couldn’t help but be so close.

As the campers made their way over to their water bottles to rehydrate and hear a breakdown of the game, Will, looking defeated, approached me and sat down. “I never win! I know the point isn’t always to win, it’s to have fun, but I just really want to win.” What a great instinct! Will is a guy who cares. He has a competitive spirit that will take him deep into adventure for a long time to come.

As I sat on the grass with Will, the sun settling down and the cool air setting in on the second-to-last full day of camp this summer, I felt a great sense of what winning really is. Will coming to me sharing his disappointment is a win. He’s sharing not only his sadness, but his hopes. Will wants something greater than just winning that game of Transformers. Will wants to be someone who overcomes challenges and comes out successful; and he did. In all of the pomp and circumstance that we see in those sports victories most observable, I think they fail to remind us that saying yes to getting on the field in the first place is a victory.

I think Jesus affirms this sense of who’s winning and losing by telling the story of the laborers in the vineyard each receiving the same amount of pay for different amounts of work. This feels backward. The workers who’d been there all day have a solid case for their disgust. Even so, Jesus turns the story into a greater vision of the Kingdom; the last shall be first and the first shall be last. In other words: You all matter.

I’m not pushing for a participation trophy; I think trophies are missing the point. Reimagining what winning actually means is more in tune with the point of why we play games and compete in the first place. Before we got up, I reminded Will that he was in fact a winner. In truth, his team would have been much less competitive without him and his passion. The same is true with Camp as a whole. Rockmont would be much less interesting without Will. Without each and every one of these campers showing up and saying Yes to all these invitations to play and grow, Rockmont could not be what it is – a place of challenge, growth, and love.

Tonight’s Scripture: Luke 10:25-37
Story: Parable of the Good Samaritan
+ Where do you see yourself in the story?
+ What’s the good news?