The Old Man and The Wall 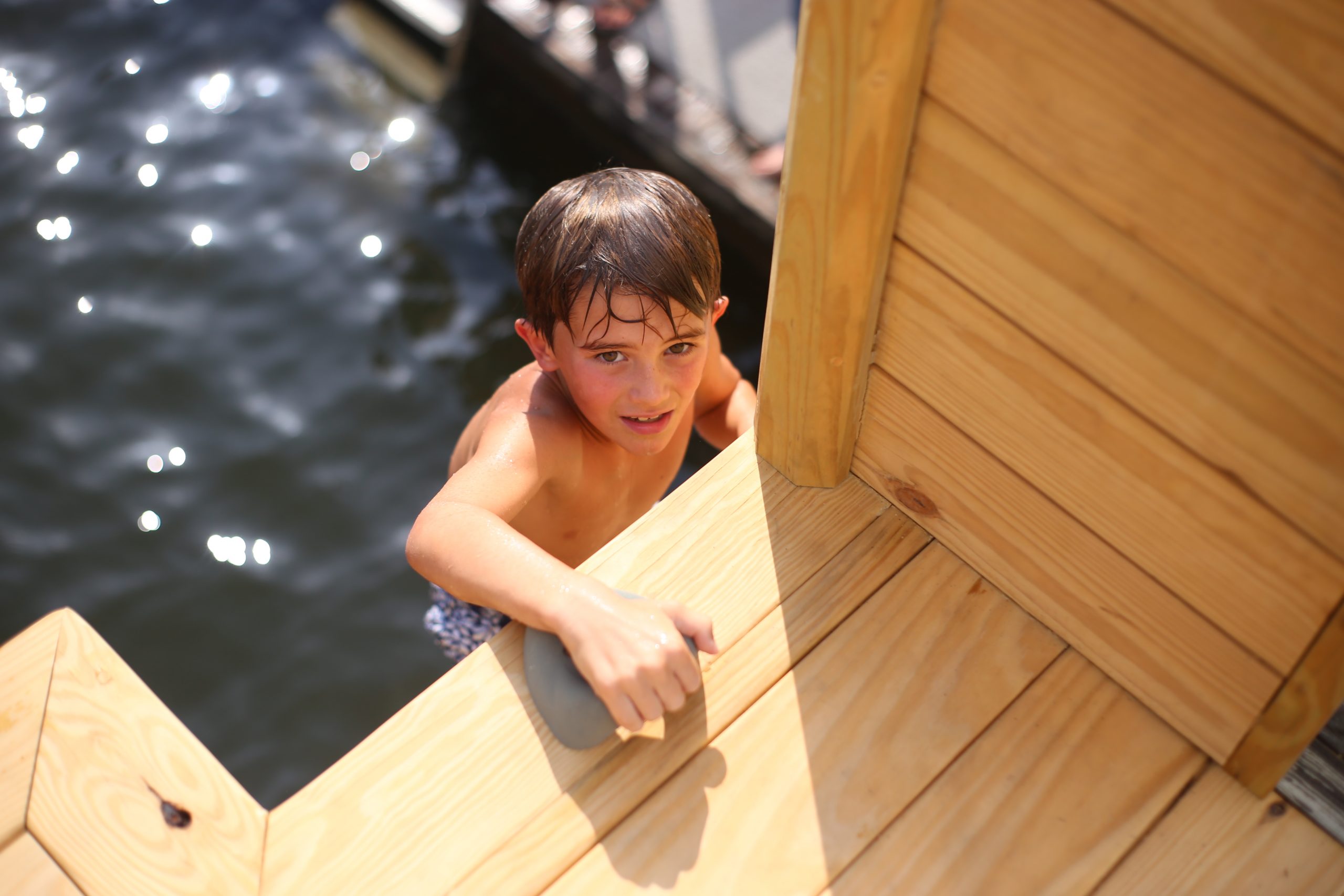 While many run up the stairs to blob their swim buddy or jump off the high dive, now, a horde of boys stand patiently waiting for their turn on the newest addition of the waterfront — the waterwall.

It’s not only one of the new attractions of free swim, but this multicolored monolith immediately catches the eye when looking across Lake Eden.

Most days, next to the wall stands Mountain Camp Director Austin Ashcraft who spearheaded its creation. 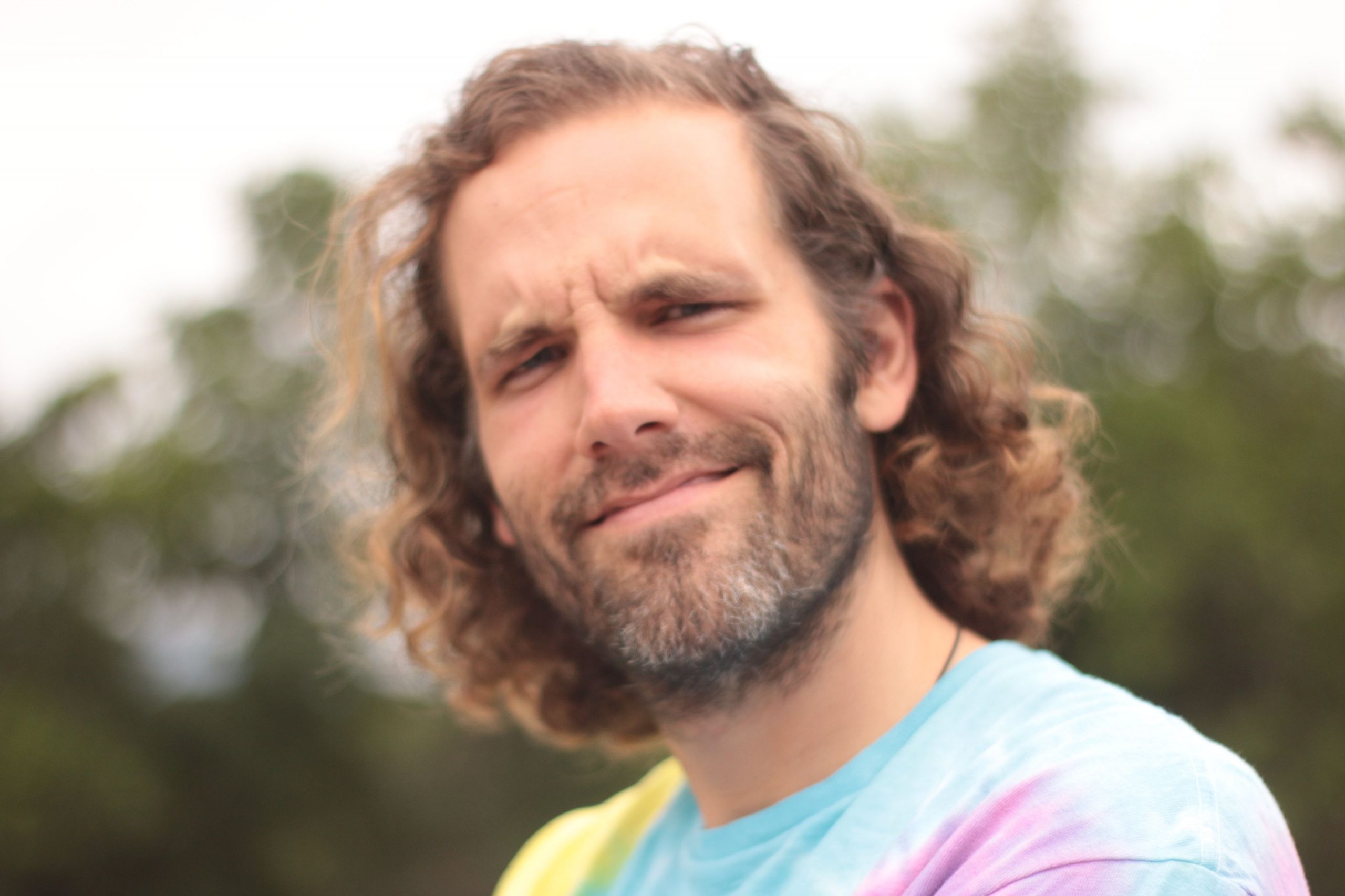 The 6-foot-3 director with his long curly hair and scraggly beard dwarfs the small crowd of camper spectators around the dock that come to see the latest attempt at the wall.

“It’s awesome to watch them coming back day after day practicing and trying,” Ashcraft said. “Some of them who couldn’t even get out of the water, now, I see them able to climb up half of it or maybe more.”

The resident rock climbers on staff put together an assortment of highlighter-hued routes across the two-sided wall. The left side is certainly the most friendly area with routes that participants of any skill level can complete.

The right side is a different story. 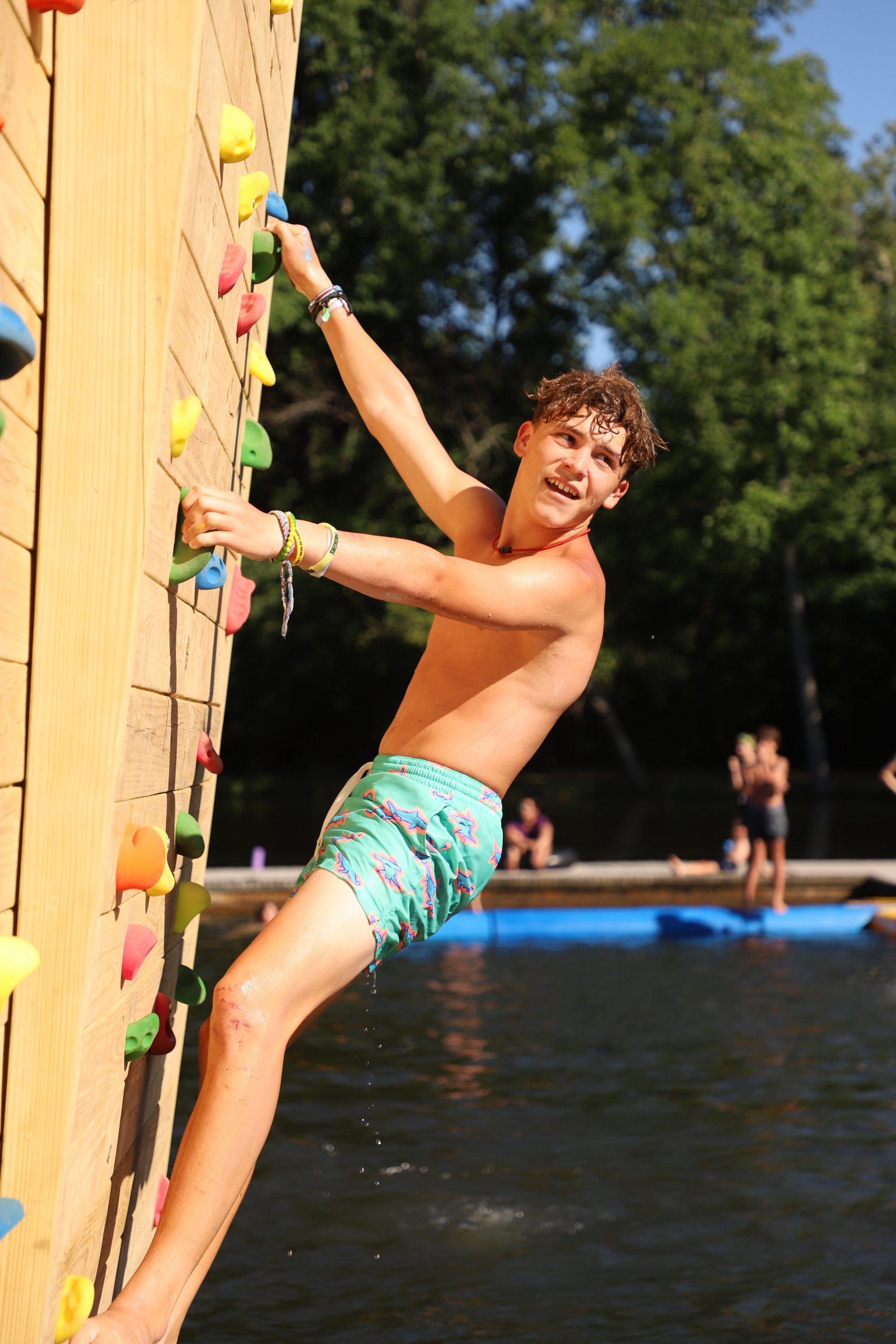 Everything about the right side is a challenge.

Not only are routes set for a higher degree of proficiency, but the wall itself leans out over the water to allow gravity to exert an even greater force on the climber.

Even for some of the most athletic counselors, the right side provides an ample challenge. At the time of writing, only a handful of staff members and a pair of campers had completed either the pink or green routes. 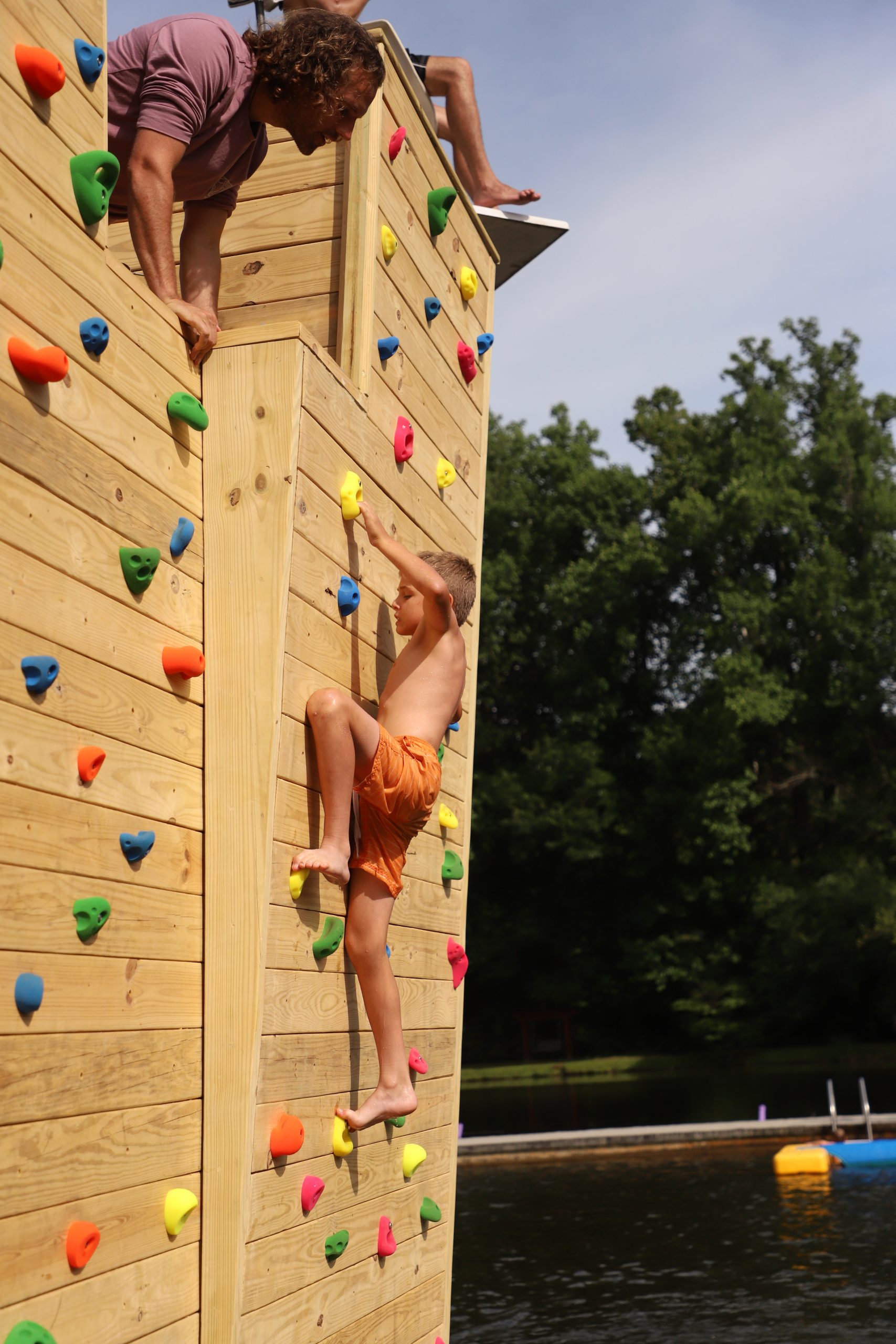 But it’s not this way without good reason.

In reality, most anyone can climb the wall. Whether you take a simple route to the left or, ignore the routes, and just use any hold within reach — any camper can summit the wall.

But the colored holds present a unique opportunity that the line of campers on the dock just can’t seem to ignore. For Ashcraft, the spirit and the meaning of attempting the water wall, and rock climbing in general, is simple:

“To get to the top of something you thought you couldn’t.” 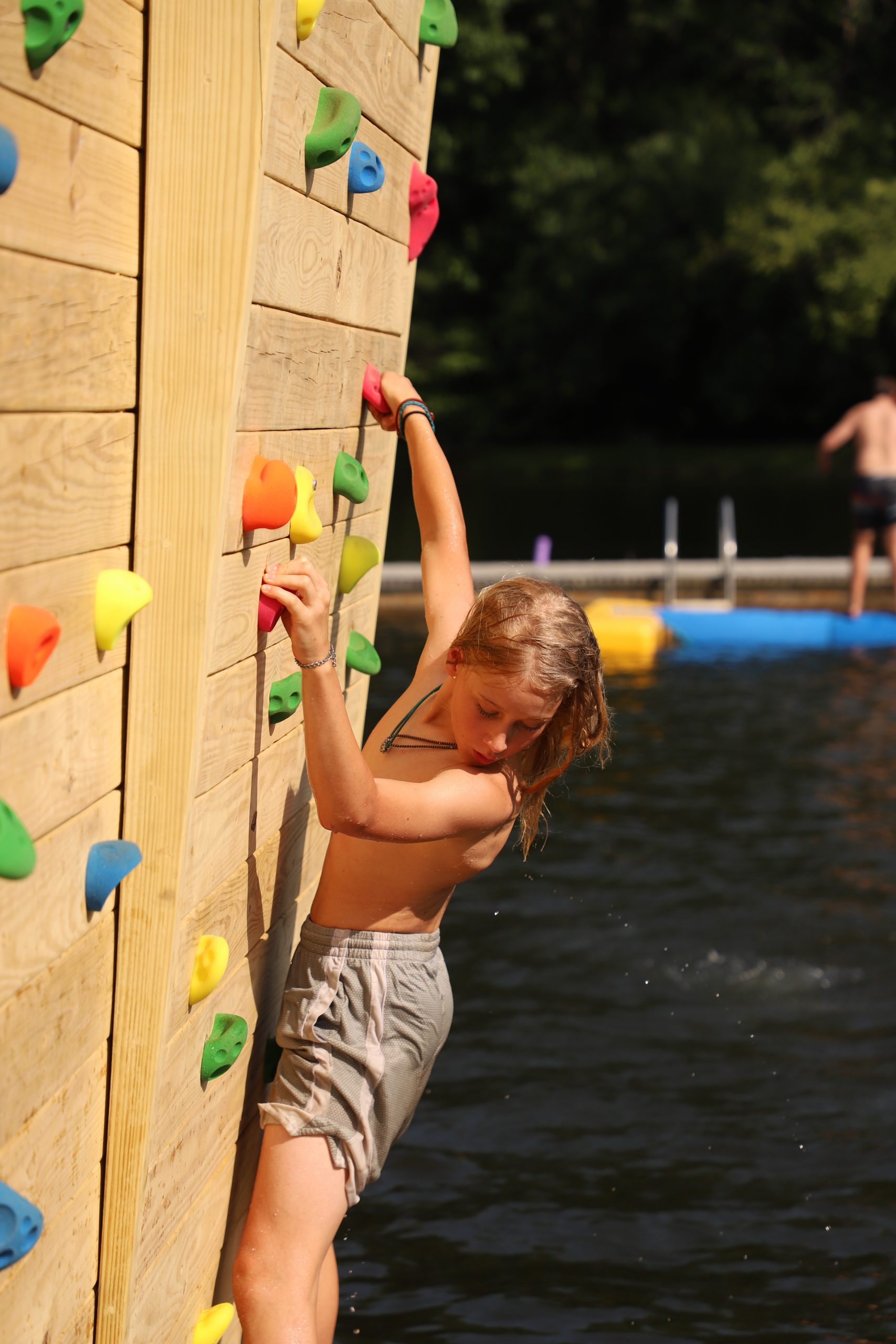 Day after day, campers of all tribes come down to the wall to give their project another go, and every day, they climb further and further up the wall.

While power and strength can get someone far, it’s the virtues of determination, perseverance and a love for challenge that gets anyone from our smallest campers to our strongest counselors to the very top.