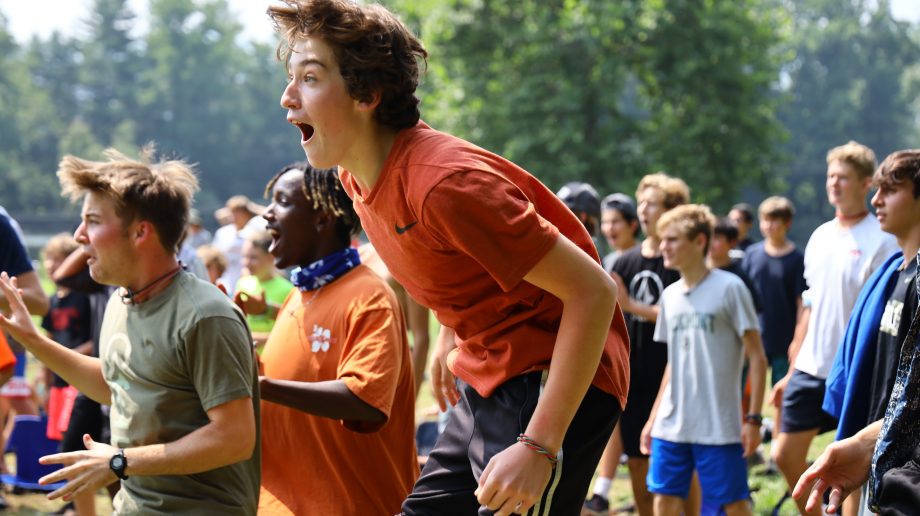 Performing in front of a crowd does not come easily to most, yet is frequently called forth and celebrated at Rockmont.

Staff encounter opportunities for public speaking on a daily basis, whether leading a skill, sharing a morning devotion, or recognizing campers at council for the growth they’ve seen while at camp.

And this morning, campers too had the opportunity to take the big stage and venture into the challenging world of public performance!

Rockmont’s Got Talent, camp’s quasi-bi-weekly exploratory talent-finding program, featured over 17 acts performed by campers and counselors from cabins 1 through 44.

These young men tamed their nerves and took the stage in front of the whole camp, bringing entertainment, amazement, and laughter to the community.

The hot North Carolina sun beat down as campers performed feats of athleticism, like backflips, splits and juggling, and musical performances.

The crowd especially enjoyed a Cabin 9 performance of “Alexander Hamilton” which would have made Lin Manuel Miranda proud, a stellar performance of Michael Jackson’s “You Are Not Alone” from a Mountain Camp counselor, and a riveting juggling showcase brought to us by a camber from Cabin 44, accompanied by “Chariots of Fire.”

The common thread between all performances was the eruption of praise at the conclusion of each act.

Campers and staff alike overcame the challenge of taking center stage in front of a few hundred people and brought a morning of relaxing enjoyment to the rest of the community.

Was there a winner? At the end of the show, the judges retreated behind closed doors and have yet to emerge.

All signs indicate that Rockmont’s Got Talent will continue its exploratory mission for the weeks and years to come!