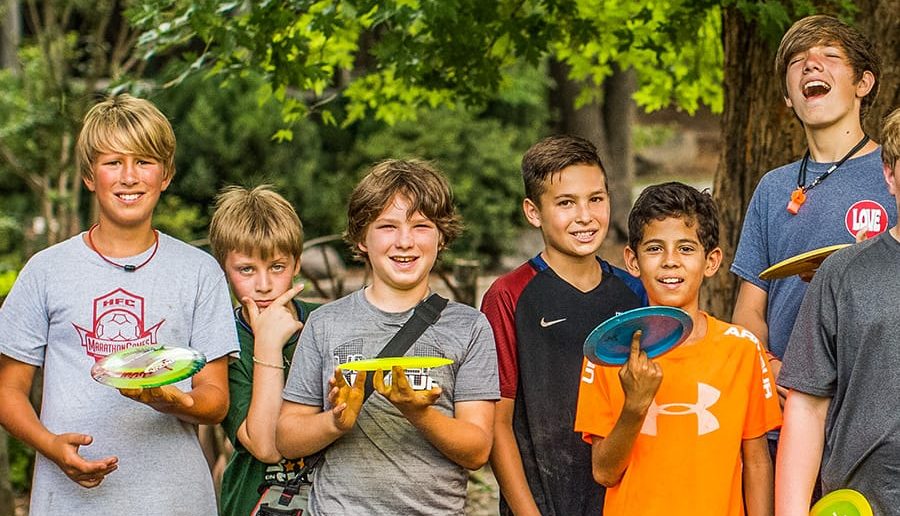 In the summer of 2012, Jack stepped onto the Rockmont property on opening Sunday as a veteran, a returner. A sense of knowledge, of comfort, and of pride coursed through his veins that morning as he unpacked his belongings in the spacious and upstairs Cabin 12- the top of Thunderbird Lodge. As I bent down to greet Jack, it was easy to see his energy and excitement for all that was to come – his emotions were palpable. He was back for another summer and ready to try new things.

One of my first memories of Jack was him inviting me to play a round of disc golf with him. I had recently began playing on a regular basis with my friends back at Mississippi State, and I had found a new favorite hobby. When Jack gave me the chance, I jumped for it. I don’t remember much about that day, but I am sure it was a lot like the game of disc golf – a whole lot of fun. Jack remembers that summer specifically. That was the summer when he fell in love with the game of disc golf.

In the coming summers of 2013 and 2014, Jack honed his skill like the majority of our campers do by playing every chance he had. Jack took the Disc Sports skill, he played during Free Swim, he woke up at the crack of dawn. Over and over he played the front 9 of the Rockmont Disc Golf Course. He learned the twists, the turns, the penalties, and intricacies. While playing this course, he also learned the technique the majority of our campers have learned – the flick.

“Flicking” is the opposite of a “backhand” throw. A lot of campers learn to flick before backhanding because of its ability to launch the disc farther. What the backhand gives you for accuracy, a flick gives you for distance. Over time, players typically hone one of the two skills but not both. Players decide what they are best and most comfortable with, and Jack found his strengths lied in a super strong flick.

In the summer of 2015, Jack decided to put his talents to the test. Every session during the summer, Rockmont hosts a competition called the “Disc Golf Open” for our campers and staff. The winners receive a coveted prize: free discs from the camp store and the glory of staking claim as the best disc golfers in that session. I’ll cut to the chase – Jack had become really good at disc golf. His practice, persistence, and patience all paid off that summer as he stood before all of his fellow campers as the champion of the 2015 Classic 4 Rockmont Disc Golf Open. A new disc in hand, Jack set his eyes on a new prize: repeating as the 2016 summer champion.

As Jack approached the summer of 2016, he was honing more than his disc golf throw. He was also perfecting the game of baseball. That spring saw him finding a lot of success on the diamond, as well as lot of playing time. As the season wore on, so did the wear and tear of the game on his young bones. In May, Jack faced an injury that threw a curveball into a lot of his plans – he would have to have surgery to repair damage to his dominant arm’s elbow. At the young age of 14, Jack had to face the fact that his summer plans would have to change. There would be no more baseball. There would be no repeat disc golf championship. There may be no disc golf at all.

With a week and a half before camp, Jack had a final pre-camp check of his arm. The doctors told him to be cautious. He could play games, but repetitive motions of a certain type could re-injure his arm. One of those motions was the exact way that Jack threw his disc – by flicking. Not one to be kept away from things that he loved, Jack asked about another motion – the backhand. The doctors gave him the go ahead, and with that news, Jack was given a new lease on his summer life. No, that was not his preferred option, but it was an option. With a week and a half of pre-camp life, Jack practiced a new throw with determination and with grit.

As Jack stepped on the camp property for his sixth summer, he did so with the same mission as he had set out for one year ago: to repeat as the champion of the Disc Golf Open. As he walked into the doors of Eden Hall on that opening day, I had barely gotten the words of “Welcome to camp!” out of my mouth before he asked me to qualify with him for the Open. I’ve had a lot of campers ask me to qualify before, but that was my first opening day invitation. Of course, I accepted.

Jack’s story is at the heart of what we ask of our young men. Struggle is part of growth. Adversity is unavoidable and an integral part of our story. Our hope is that when camper’s come face-to-face with elements that push them out of their comfort zones – accompanied by a supporting staff – they will become better equipped for the challenges to come. Our hope is that they will find or develop skills they did not previously know exist within them.

This is a story of the determined grit that resided inside of our protagonist. Jack found challenge and fought it. He found struggle and he pushed back. He experienced brokenness and allowed it to bind him stronger than before.

In the dining hall that night, Jack stood before all of camp with a new disc in hand. Jack’s smile was a little wider that night, his chin a little higher. On his face was the look of accomplishment far greater than becoming a repeat winner of the Disc Golf Open. He carried with him the knowledge that he could have backed down, he could have given up. He could have.

As Jack and I qualified for his fourth straight Disc Golf Open today, as he birdied basket after basket, I was taken aback by the stories we get to be a part of at camp. Stories of adversity. Stories of growth. Stories of failure and of success. Five years ago, Jack and I played our first disc golf hole together. The course is unchanged, the rules remain the same. It’s players, however, those have been changed forever.

Tonight’s Scripture: Mark 12:41-44
Story: The Widow’s Offering
+ Where do you see yourself in the story?
+ What’s the good news?