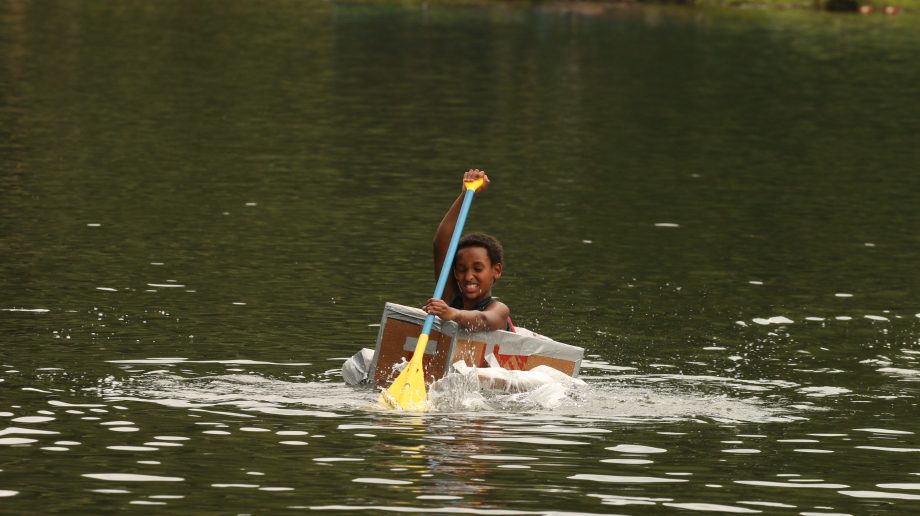 The Deer Campers enjoyed a trip to the Cola-Stop this afternoon.

A well earned treat after a cabin campout! They had Cheerwine, RC Cola, and many different types of candy. Truly one of the best treats of a session.

What they didn’t realize was that their favorite soda company would become the sponsor of an epic cardboard canoe race!

Each cabin formed a team and was granted a “starter pack” of supplies: two large sheets of cardboard, a roll of duct tape, and two trash bags.

Their task: build a boat that could float. 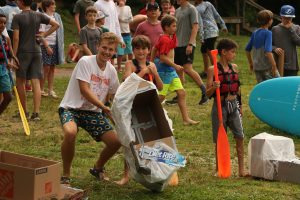 The Deer Camp cabins immediately began strategizing, and I could hear questions all over the upper soccer field.

“Should we seal it with duct tape?”

“How do we keep it from tipping over?”

“Where should we put the Cheerwine logo?!”

As the afternoon progressed the boats started to take form.

Some were covered in duct tape. Some boats used trash bags as buoys. And some boats just looked like they didn’t stand a chance. Nevertheless, the time for the race was upon us.

Each tribe would race for glory, and yet another trip to the Cola-Stop! 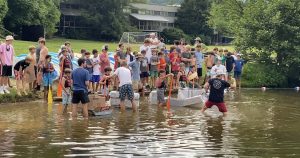 As the race started, cheers came from the banks. Some of the boats held their shape while others started to capsize. In the first race, between the cabins of the Hickory Tribe, Cabin 17 reigned supreme in the “Kit Kat” boat. The sturdy design and approach put them above the rest.

In the Hemlock race, the top tier engineering of Cabin 25 took them to the top!

Sponsored by RC Cola, their captain paddled the entire way to victory.

The race combined many things that I love about camp: each cabin worked together as a team to build their own boat, and they supported each and cheered with vigor as the race ensued.

The two cabins will go to the Cola-Stop for their victory, but in my opinion, everyone in Deer Camp won this afternoon!