The Best Session of All Time 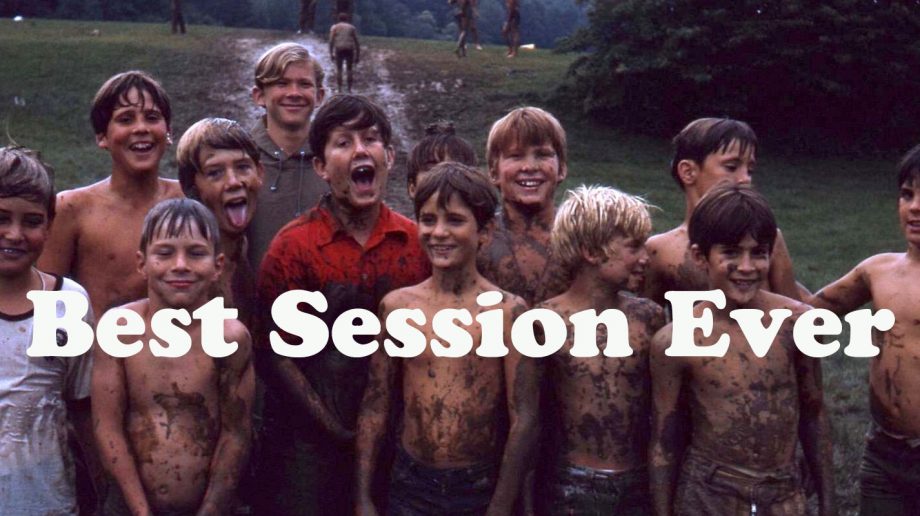 I want to tell you about my favorite session of all time at Camp Rockmont.

I had the privilege of being the Buckeye Tribal Director (our youngest tribe) for the third summer in a row. Each summer was similar – campers lived in Arrowhead Lodge, we played similar games, ate similar meals – you get it! But each summer was also marked by different events, challenges, and incredible stories.

One unique aspect of 2013, specifically B1, was the weather.

It was the rainiest session in living memory.

The Bear Camp leadership – Shawn Marler, Drew Fowler, and me – were unaware of the challenge ahead of us, but fit for the task.

The B1 Buckeye tribe was a lean, mean, fighting machine: 24 campers across 4 cabins, and 8 of the best counselors east of the Mississippi – among them, Tommy Blick from Hungary, and… Andrew Ginn!

At camp, we have a saying about rain: What happens when it rains at Rockmont? We get wet! (unless our thunder system tells us there’s electric activity in the air). Five days into a soggy session, however, and we were more focused on staying dry.

And this challenge sparked some of the greatest programs the Buckeye tribe has ever seen:

Giant fort building inside the lodge, hallway bowling, Pictionary tournaments, nightly movies, a film festival style skit presentation, and the inception of the Camp-In (defined as camping in the lodge, cooking over the E.W. Grove Fireplace, etc.).

During brief periods where the rain would let up, we would sprint outside and further establish the south slope next to the flagpole as a mudslide. You can see a remnant of our slide to this day! The Buckeye tribe seemed like a world in and of itself.

Lightning safety is a top priority at Rockmont. As such, we have a system that notifies us when there is electric activity in the air – it’s loud, proud, and you can’t miss it. No matter where you are on the property when the tri-tonal horn goes off, you go to the closest shelter. Or you stay in your current shelter, as was the case on this 2013 session’s second Tuesday – after lunch.

When the camp is stationed in the dining hall together for extended periods, we always have a plan.

The Tribal Directors sing silly songs, there are table games, and even some Rockmont trivia. It’s quite fun! But on this day, after a full hour of songs, table-thunder, and many questions that were consistently answered “Stevie Sandman,” it seemed (for a moment) our sleeves were empty of tricks.

He placed a projector on a table, plugged in the central PA, and threw in an unknown DVD – Turtle: The Incredible Journey.

He effectively lit a fuse.

For a moment, there were murmurs, but by the beginning of the narrator’s script every eye was fixed on the screen. 350 campers, 150 staff members, even Guy and the Aramark Kitchen Crew joined in.

And the electric activity moved indoors.

Slowly, out of the sand, popped a tiny turtlehead.

There were cheers from every corner of the dining hall. Then another, and another, and before Shawn could realize what he had done, an army of turtles began their long journey to the water’s edge to the soundtrack of 500 humans cheering as though the turtles were members of their absolute favorite sports team!

“GO LITTLE TURTLES GO,” was a memorable chant that began in Bear Camp and spread throughout Eden hall.

A wave was started in Mountain Camp and fell apart somewhere around where the Hickory tribe sits. The future seemed bright for the marching army of turtles, and the onlookers…

And then the seagulls showed up.

The crowd went wild, as though their boos could offset the flight-path of these turtle predators.

Narrator: “And there are also dangerous crabs along this journey.”

A giant NOOOOO echoed through Eden hall and out the window screens to the valley outside.

Campers and staff across every cabin and tribe, united behind the journey of these newborn turtles.

Thorguard sounded the all-clear at this point, notifying the electric activity outdoors had passed. A director paused the DVD and made the announcement, almost receiving a crab-level rebuke from the crowd. The turtles would keep marching, and we were going to see this through.

The narrator began noting the distance of the frontline turtles to the water. A helpful, but not long-lived note. The crowd began shouting their own perceived distances in unison:

Tears were shed, and tribes were almost re-named. Mountain Campers had hoisted Bear Campers on their shoulders, waving homemade (table-made) flags with 4 The Turtels (misspelling noted), marching and weaving through tables!

And it all happened because we had a little thunder.

All this to say, I agree with Mike’s article from a few weeks ago – when camp has faced challenges, the product often becomes a favorite memory of campers and staff.

And as we march on towards camp this summer, I’m very, very excited for the uniqueness of 2021.