Be Patient and Have Courage! 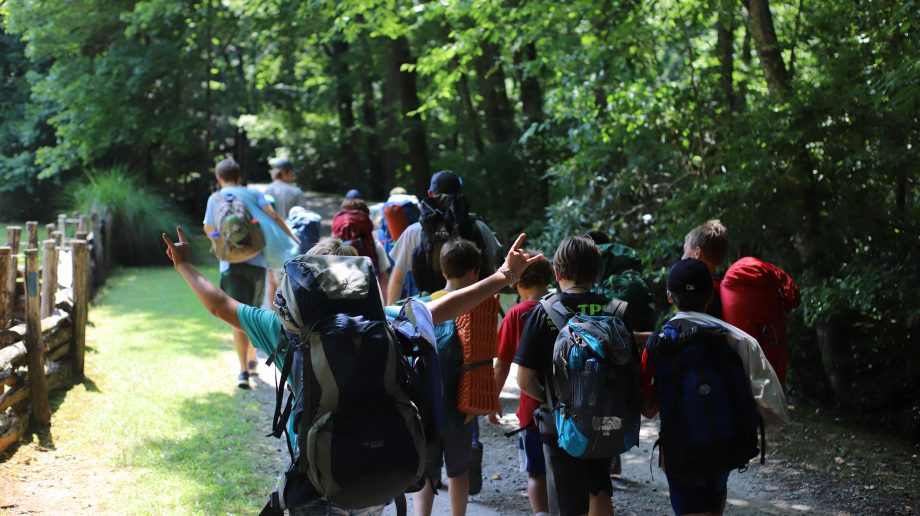 On the property, we have five individual adirondack shelters that serve as fantastic campsites. While on the camp out, the cabins enjoyed hot dogs, chips, and of course s’mores!

We believe in camping at Rockmont, and I invite you to read Andrew Ginn’s blog “The Case for Camping.”

Spending a night in the woods is a call to adventure, and for many it is their first time sleeping outside.

It is a challenge, and it is one that I am grateful for.

The next morning, the campers toasted bagels over the fire and laughs were shared. After breakfast, everyone geared up for a hike. The Hickory Tribe headed to Choctaw Rock while the Hemlock Tribe went to Eden Rock.

Both hikes are challenging, and they require everyone in the tribe to work as a team.

Everyone needs to go at a similar pace to get to the top.

I hiked with the Hemlock Tribe as we moved towards Eden Rock, the highest point at Camp Rockmont.

There was lots of enthusiasm from the start.

Campers and counselors can often be heard singing songs to help pass the time as they move one foot in front of the other. We don’t rush this hike. We take plenty of water breaks, and everyone always gets a chance to take a deep breath.

At the opening council, I had challenged Deer Camp to be patient and to have courage. They needed both of these traits on their way to the top.

Every Hemlock camper cheered when they finally stepped onto Eden Rock*.

And then everyone was rewarded with a much deserved break before a word of encouragement was given by Hemlock Tribal Director, Hayden Chunn.

I was incredibly proud of each Deer Camper for their determination!

*Campers in Hemlock will each receive an Eden Rock patch for summiting. The patch is made in Weaverville, NC by A-B emblem, the same company that made the original NASA patch. Now that is pretty cool!