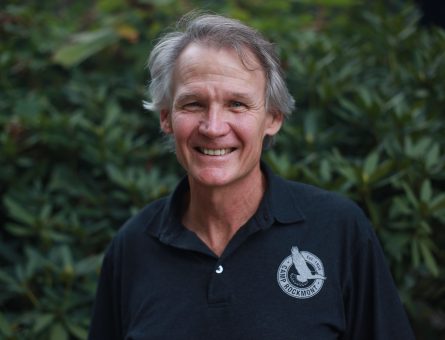 Rockmont has been an integral part of Chuck’s life since he  first arrived as a camper in 1972. After spending 2 years as a camper, Chuck returned to Rockmont as Junior Counselor, Counselor, Tribal Director, CIT Director, and Soccer Skill Head.

Following an 11 year career as an independent school administrator, Chuck embarked on a 22 year career as an executive in the telecommunications industry – the last 17 of which were in Richmond, VA where he served as COO, President and Chief Strategy Officer of Mapcom Systems.

When the time was right for Chuck and his wife, Kathy, to retire from their “Chapter Two” careers, they jumped at the opportunity to buy King and Mur Taylor’s house here on the grounds of Camp, overlooking the Council Ring that Mountain Camp used in the late ’80s/early ’90s. As Chuck listened to Reville each morning this past summer from his screen porch up the mountain, he knew that he wanted to be involved again.

Chuck believes that the Rockmont experience can be a cornerstone of a life of service and leadership, that the Rockmont motto is an ongoing roadmap for navigating all of life’s challenges, opportunities and adventures. He is already hard at work working with our Directors and Skill Heads to make our skills and activities even better.